This is a single blog caption

There has been a lot of debate about whether or not traditional marketing channels, such as print ads and billboards, are on the way out. While some argue that the “old ways” are dying out, others strongly believe that “print is not dead”, and that Super Bowl and other tv ad slots are actually underpriced and undervalued.

The landscape is certainly changing, no doubt about that. But, I believe that traditional advertising is actually experiencing a renaissance, or a rebirth, into our digital and social media driven age. The consumers are still out there- and are more accessible than ever before. But the way in which we as marketers are reaching them is slowly shifting from ink and paper to screens and devices. As more and more ‘digital natives’ (kids who have grown up with a smartphone in their crib) gain purchasing power, how do we as advertisers know where to most effectively spend our advertising budget?

It turns out that the introduction of new advertising platforms- such as Facebook, Twitter, Snapchat, and Instagram- doesn’t automatically eliminate the need for newspapers, print ads and billboards after all. The same principals that have driven advertising for years still hold true in this digital day and age. I’ll show you what I mean.

Be Where Your Audience Is

The old ways of advertising have been under fire lately. Social media sites are boasting huge numbers of eyeballs on their platforms every day and that number is growing. While the numbers are impressive, it’s the capabilities that really make them so attractive.

Thanks to the ever-changing tech landscape, digital ads can be more targeted and relevant than ever before. Marketers now have the ability to quickly A/B test everything with their ads and adjust copy, color, picture, size, placement, in near real-time. Brands also have the ability to use social media to get closer to and more personal with their fans than ever before, a luxury not available to most traditional advertising platforms.

But with so many distractions online and every second of attention being sought after by advertisers, how long until these new markets become oversaturated? Do we know if these new tactics are any better than the old methods? While all of these new technologies are impressive, one fundamental law of advertising remains unchanged:

You need to focus on where your audience is.

If your target market is mostly online, you need to advertise online. If they frequently pick up newspapers and magazines, then you should focus your energy on print. If their heads are in the clouds, you better start skywriting. 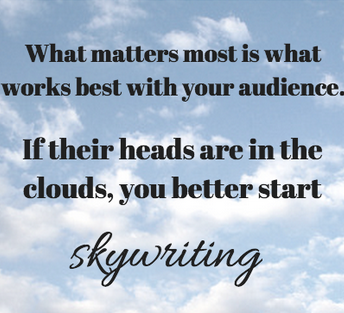 Get the picture? What matters most is what works best with your audience– not what the latest trend or tactic happens to be. However, as more and more consumers grow up using these newer technologies, newspapers and advertisers alike are beginning to take notice. The number of consumers using smartphones and social media is exploding and many in the ad industry are adding digital arms to expand their reach and to insure the success of their business models.

It seems like the addition of digital advertising into the traditional arsenal has not made the old ways obsolete, but actually increased the consumption of content as a whole. Print is clearly not dead, and this is evident by the projected 8% growth rate in global ad spend from $584 in 2011 to $668 billion in 2017. But adaptation and experimentation are still necessary if the old ways advertising are going to survive.

After 279 years, the ‘world’s oldest newspaper’ has gone online and larger publications have started to reap the financial benefits of digital subscriptions.  It’s evident that consumers of ‘newspaper articles’ are still out there- they just don’t all look the same or consume content in the same, predictable ways anymore.

This is due in part to smart phones, which 58% of American adults now have, and the way digital natives consume content. Most readers don’t ‘subscribe’ to publications anymore, they simply read articles that are interesting to them and have little or no loyalty to specific publications.

While this may come as a surprise, the industry has been aware of this situation for quite some time and many publications tested ‘going online’ as far back as 1981.  As these more senior players are adding digital to their resumes, some college publications are implementing a digital first strategy and creating physical copies as an afterthought.

As I mentioned above, the adoption of smartphone technology is on the rise and it would be wise for publications who focus on print media to try their hand at digital tactics. Even if you prefer to consume content through more traditional mediums, there’s a good chance that your mobile device is almost always within arm’s reach and time spent looking at screens is at an all time high.

Combined with the 74% of online adults (according to PEW Research) who use social networking sites, these numbers represent a huge potential market with purchasing power that will only grow as digital natives become adults. Since most adults have smartphones and are also on multiple social media sites, we go back to the “attention graph” philosophy mentioned earlier: advertise where your customers want to be.

Brands and advertisers that learn how to optimize these new platforms while still catering to those who prefer the traditional platforms have the potential to shape the future of advertising.

It is a requirement of my job that I secure only superlative talent for my clients and institute company culture for high-octane gifted professionals chosen to work for the Caprola Squad, Inc. I’m in the business of communication. I love a good ol’ fashioned yap session. Blabbing about any and everything gets good conversation going. Conversation leads to ideas and an idea is the first step to something great. Today, technology is advancing every minute and software is built every second. But never lose sight of the fact that it’s still and always will be about the interaction of people. Me talking to you! And that will never change. Ever!